For the City to determine a preferred alternative to reroute the existing truck traffic, an Environmental Impact Statement (EIS) must be conducted. The EIS will include robust community outreach and opportunities to engage for all interested parties on potential alternatives for freight traffic. Council approved moving forward with the EIS at the June 14, 2021, Committee of the Whole Meeting.

As of July 2021, the City is looking to hire a project manager to oversee the EIS to determine an alternative access route for existing truck traffic. The City will also hold monthly meetings with the Allentown community to provide updates on the EIS and hear firsthand about questions and concerns.

Meetings will be held on the 4th Tuesday of every month from 5:30-6:30pm at the Tukwila Community Center.

The following four alternatives were considered (along with an option that maintained current conditions) as part of the 2016 BNSF Railway Intermodal Facility Access Study:

42nd Ave S Bridge/S. 124th St. (Status Quo)
This is the current route most trucks and vehicles use to access the facility. This will be considered the no-build or baseline alternative.

Gateway Drive – North Leg
This proposal would connect with the existing gate through the north leg of Gateway Drive, a new roadway between the Boeing Employee Credit Union and ITT Technical Institute building, and a new bridge over the Duwamish River.

48th Avenue S
This alternative accesses the facility at the south end via the existing 48th Avenue S roadway and a new bridge over the Green River Trail and Duwamish River.

S 112th Street
This alternative accesses the facility at the northern half via a new roadway along the existing Seattle Public Utility and Seattle City Lights utilities corridor. 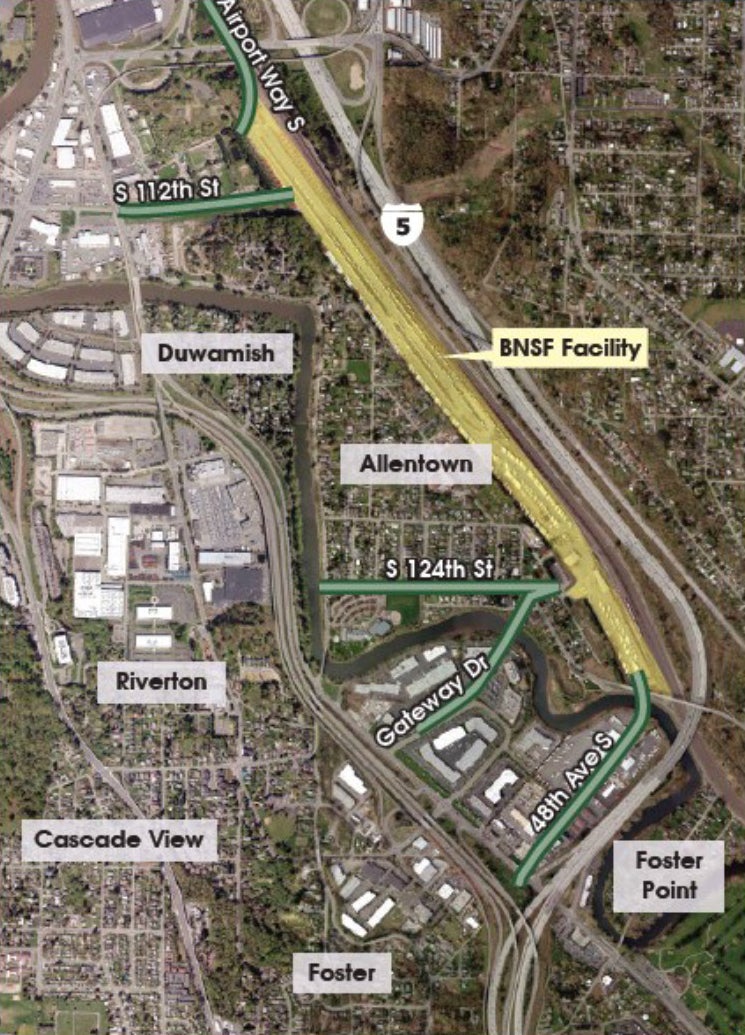 How is the Environmental Impact Statement (EIS) being funded?
City funds will cover the cost of the EIS.

The US Congress is considering spending trillions of dollars on infrastructure – has the City of Tukwila applied for those funds to reroute freight traffic?
The City has not applied for infrastructure funding to reroute traffic. The City must complete the EIS process in order to determine a preferred alternative and then begin design work before any such project would be a candidate for funding.

What is the role of BNSF in this process?
We anticipate that BNSF will be an engaged stakeholder in this process, and we are including them when we share information, where appropriate, including invitations to public meetings. As with the larger Allentown community, BNSF is an important stakeholder going forward regarding any conversations about rerouting freight traffic.

How can residents be involved in this process?
The City will continue to hold regular meetings with the Allentown community, and residents are encouraged to attend for updates and to ask questions, voice concerns, and suggest future actions. The truck reroute EIS process also includes opportunities for public comment, both at the project start and as part of review of the draft EIS. The City website will be updated to show upcoming public meetings and other opportunities give input.

Have you thought about developing a citizen task force about this issue?
The City has been working with the Allentown Advocates and will continue to work with them throughout the duration of these projects.