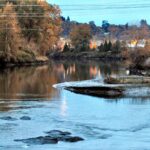 Cecil Moses Memorial Park, a King County facility, is located at the northern end of the Green River Trail, a 19-mile trail stretching from the park south towards Auburn. The trail provides excellent views and access to the Green-Duwamish River and surrounding river valley. Parking is available at the north end of the park with restroom facilities during spring, summer and fall seasons.

Cecil Moses Park is located along the west bank of North Wind’s Weir in the critical transition zone for young salmon moving downstream to Puget Sound with an extensive tidal mixing of fresh and salt waters which allows the young salmon to adapt from the fresh water of the Green-Duwamish River to the salt water of Puget Sound.   The park and surrounding area are a wonderful area to view birds, salmon, and other wildlife.

When water levels are low, notice the rocks to the north of the bridge near the eastern shore. This is a Native American cultural site known as North Wind’s Weir and in the southern Puget Sound Salish oral tradition in the stories collectively known as the “Epic of the Winds.”

Listen to the epic as told by Roger Fernandes.

Fernandes is a Native American artist, storyteller, and educator whose work focuses on the culture and arts of the Coast Salish tribes of western Washington.